My Challenge for Hispanic Heritage Month

Hispanic Heritage Month is celebrated between September 15 and October 15 every year, to commemorate the history and contributions of Hispanic, Latino, Chicano, Tejano, and the diaspora communities that make up a large portion of the United States.

Since I joined the tech world a few years ago, I discovered that Hispanic women only make up 2 percent of the workforce. I’m proud to be part of the Vynyl family for many reasons, but our support of the Hispanic community means a lot. Knowing that a diverse field of candidates leads to diversity of hires, Vynyl made a donation to Latinas in STEM, a non-profit whose mission is to “inspire and empower Latinas to pursue, thrive, and advance in STEM fields.”

As a native Texan, I consider myself and my family to be Tejano. Having lived in California for 10 years, I’ve come to appreciate the Tex-Mex culture and food that I was raised with—I didn’t know what I had until it was three states away.

During the pandemic, many people have turned to hobbies such as cooking and breadmaking. For me, I decided to celebrate Hispanic Heritage Month by learning the recipe for my grandmother’s flour tortillas...30 days to learn the recipe that takes years to master.

Although my grandmother, Nicolasa Perez (we called her Mamo) passed away when I was still a child, sitting in her kitchen while she made tortillas were some of the happiest moments of my life. Thankfully, her influence lives on with my aunts, uncles, and cousins, who helped me with this recipe.

Mix flour, baking powder, salt, and Crisco in a mixing bowl. Slowly add the water into the mix. Mix with a fork, then hands, until the dough forms a large non-sticky ball. Place a damp towel over the bowl, and let the dough rest for 25-30 minutes.

After the dough has rested, knead the dough for a few minutes, and then divide into egg-sized balls. Roll these out with a rolling pin. If the dough sticks, sprinkle the pin and dough with flour.

Put a comal or flat pan on medium heat. Place the uncooked dough in the pan. Let the dough heat until lightly browned in spots, usually about a minute. Flip once, and continue cooking on the other side.

Remove from heat, and enjoy.

Although the recipe is simple, perfecting my grandmother’s tortillas has been much more complicated than I thought it would be. It took me the full month before I felt that I had captured something close to what my grandmother used to make. I look forward to improving it over time, and passing all of her recipes down through the generations. 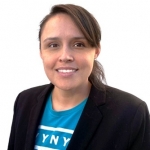 Paula Perez is the executive assistant to the CEO. She previously supported presidents and CEOs at Paramount, Warner Bros., and The Academy of Motion Picture Arts & Sciences. She holds a Master of Arts in cinema and media studies from University of California, Los Angeles.